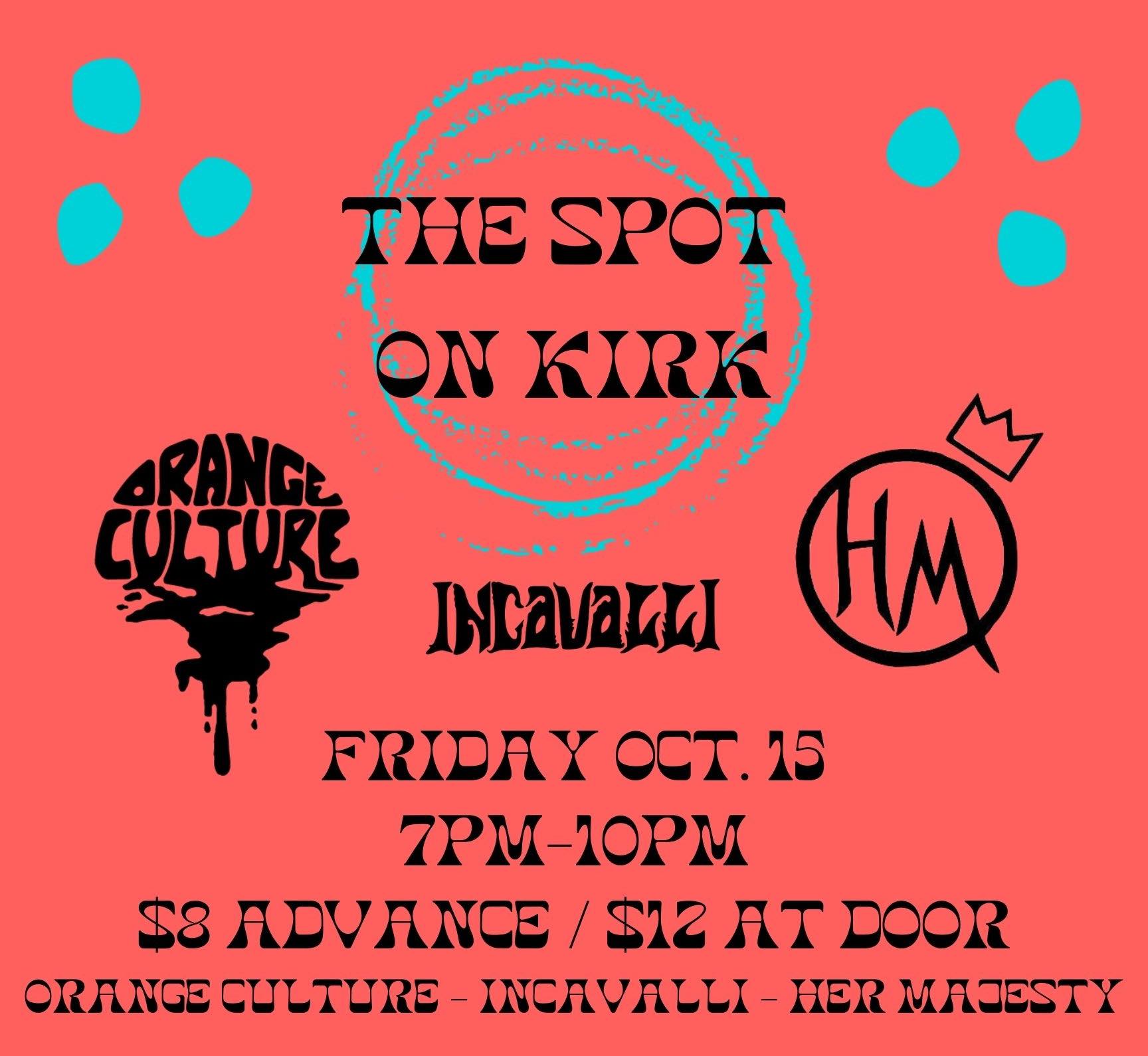 Roanoke-based rock bands, Orange Culture, Incavalli, and Her Majesty come together for a glorious night of local indie rock at The Spot !

Fresh off two epic shows at FloydFest 2021, Orange Culture had used their time in quarantine wisely, recording and producing their first full-length effort, OCCO. From the opening call of Komorebi to the final disintegration of Ambition, Orange Culture showed they’re a sum of their influences, fusing pop, jam, prog, folk, and classic rock to their already potent brew of psychedelic punk.

In 2019, while still in high school, Orange Culture and other local bands revitalized the Roanoke Valley youth music scene with their original music and high-energy live shows. The band built a supportive fan base in Virginia through word of mouth and social media, and their growing reputation landed them opportunities to play for larger crowds, opening for the likes of B.o.B and Kendall Street Company.

Orange Culture’s sound is fresh and distinctly original. The rhythm section of Reid Jepson (drums) and Landon Carder (bass) provide a tight, steady groove and dynamic backbeat for the sonic soundscapes of guitarist Charlie Lewis. Lyricist and lead vocalist, Griffin Boucher, sings with a unique voice, writing stories well beyond his teenage years, about a generation struggling under the sun in a fragile world. On OCCO, they also added horns, courtesy of 16-year-old brass phenom, Tatum Jepson. But one thing about this exciting, young band is unmistakably clear...Orange Culture plays with the confidence and energy of a band out to breath new life into rock and roll!

Incavalli is a four piece band from Salem, VA. Incavalli is an upcoming band from the Roanoke Virginia scene bringing in elements of psychedelic rock, funk, blues, and punk to create a powerful combination guaranteed to get you on your feet. The band released their debut album " Cranberry Lake '' in August. The band consists of Victor Ramos on lead guitar and lead vocals, Macs Brisson on rhythm guitar and keyboard, Matt Elmore on bass guitar, and Noah Sturgil on percussion.

Her Majesty is a punk-pop trio from Virginia. With musical influences from artists like Green Day, Black Flag, and Destroy Boys, the three piece brings an explosive blend between elements of old school American punk as well as melodies and lyrics that will have you singing along to every track. The band consists of Felix Byler on guitar and vocals, Zora Dulaney on drums and backing vocals, and Sam Slate on bass.